St. Landry Catholic Church
Parish History
​St. Landry Roman Catholic Church in Opelousas, known as the Mother Church of Acadiana, is the second oldest church parish in the Lafayette Catholic Diocese.  Completed in 1909, this cathedral-size church is the third building to sit on this elevated track of land.  It is referred to as the Mother Church of Acadiana because more church parishes have been carved out from the original church parish than any other in Southwest Louisiana.
This beautiful edifice symbolizes not only the strong Catholic faith of South Louisiana, but also the rich history and culture of the region.

​With a history that dates to the mid-1700s, St. Landry Church is perhaps the most celebrated church parish west of the Mississippi River.
​The first recorded ritual at Opelousas occurred on May 16, 1756, at the home of Jacques Courtableau.  The baptism of Jacques André Desbordes, the grandson of Joseph Le Kintrek, one of the earliest traders to the area, was performed by a priest named Pierre Didier, a Benedictine from Pointe Coupée that also served the post at Natchitoches.

By 1765, a church house had been constructed at the Opelousas Post on the Opelousas River and its first resident pastor was Friar Valentin.  According to the old church records, the parish church was officially founded in 1770 as La Iglesia Parroquial de la Immaculada Concepción del Puesto de Opeluzas (The Parish Church of the Immaculate Conception of the Post of Opelousas) by French Capuchin friars.  However, the diocese recognizes the founding date as 1776, because the oldest church record on file in the archives dates to 1776.  In contrast, early civil records make mention of ecclesiastical activity at “the parish church…” as early as 1766.

The Louisiana colony changed ownership in 1762 with the signing of the Treaty of Fontainebleau, which ceded the entire French colony to Spain.  However, Spain did not formally enforce their rule in the colony until 1769 with the arrival of Governor Alejandro O’Reilly.  By the early 1780s, Spanish Capuchins took control of the Opelousas church.

In 1774, a second, larger and more ornamented, church building was constructed.

​Friar José de Arazena, a Spanish Capuchin and pastor from 1785 to 1789, is credited with saving the church’s early records.  Many records were lost, destroyed or filed incorrectly.  Arazena poured over the records, putting them into chronological order and copied some records that were deteriorating to the point that they were barely legible.

Friar Pedro de Zamora, another Spanish Capuchin, took control of the parish in 1789.  During his tenure as pastor, St. Landry Church celebrated two significant events: a name change and a physical move.  In 1792, the church changed its name to the “Parish Church of St. Landry.”  Although the colony was under Spanish control, most of the inhabitants were French and they honored the church by naming it after the Bishop-Saint.  St. Landry served as bishop of Paris from 650 to 661 A.D.  St. Landry is the patron saint of both the church and the civil parish of St. Landry, and is the protector and patron saint of Opelousas.

​Secondly, the church moved from its original location near today’s Bayou Courtableau to its current location.  Zamora had requested permission to build a new church at the center of the post’s population.  Permission was granted and in 1796, wealthy planter-cattleman Michel Prudhomme, along with Madame Tesson, donated a total of 134 arpents of land for the new church.  The church, presbytère and other buildings that made up the church complex were built with cypress furnished in part by Prudhomme.  The new building was completed on June 17, 1798.

Brothers Gilbert and François Raymond served as pastor and as assistant pastor, respectively, in 1855.  François would later serve as pastor.    They are credited with establishing Opelousas’ first catholic school, today known as Opelousas Catholic School.

The church building was enlarged in the late 1850s and beautiful statues and frescos were added to the interior.  However, the Civil War brought devastation and destruction to the Opelousas area, and desecration to the church.

Federal troops camped around the church and ravaged the interior.  The church would have been completely destroyed, but thanks to the Irish Catholics in the Union ranks, it was spared outright elimination.

​By the turn of the twentieth century, Opelousas was in need of a larger church.  The pastor placed in charge of this task was Holland native Fr. John Engberink.

In 1901, Archbishop James H. H. Blenk of New Orleans approved the plans for a new church.    The project was given to Diboll and Owen Architects of New Orleans.  Begun in 1902, the foundation was prepared to be “as hard as natural rock.  2,000 barrels of cement were used… the bricks of the old (1828) building were used in the construction of the concrete foundations….”

In 1903, the building contract was awarded to Charles Thibodeaux and construction on the walls began, but was later halted for five years.  Then, on August 8, 1908, the corner stone for the new church was laid.  The church was completed the following year.  On April 2, 1909, Mass was first celebrated in the new building, and on April 7, it was dedicated by Blenk.

After more than 20 years as pastor of St. Landry, Engberink died in 1918.  He is buried, alongside Father Gilbert Raymond, at the foot of the sanctuary.

Msgr. Albert Benedict Colliard came after the death of Engberink. Colliard served the church parish for more than 30 years.

​The interior, including the stained-glass windows – which were created by German artisan Emil Frei – the statues, and the main church steeple, were all completed by Msgr. Colliard.  In addition to the windows, the striking features inside include the barrel vaulted nave, and arcade of massive Corinthian columns.

Colliard died in 1950 and is buried in the church cemetery.

In 1963, St. Landry underwent a dramatic renovation that saw the installation of air conditioning and a new sound system, but also brought about the removal of the original altars.  It is this renovation that visitors see today.

As one of the largest churches in the Diocese of Lafayette, St. Landry is one of the finest examples of Romanesque Revival in Louisiana.  The exterior is a Gothic form with Romanesque motifs, while the interior is Romanesque. It is based on the basilican plan.  The most prominent feature is its octagonal turrets and large main tower, which houses St. Landry’s bell, the Immaculate Conception, which still rings today.

The Church and church cemetery were placed on the National Register of Historic Places in the United States on May 5, 1982. 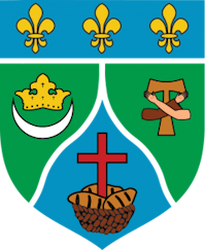